The use of hydraulic fracturing or “fracking” has played an essential role in boosting U.S. oil and natural gas production over the past decade. Hydraulic fracturing has been used to safely extract resources for decades, but there are still misconceptions about the process and how it is completed safely and in an environmentally friendly manner.

Hydraulic fracturing is when fluid and other materials are used to create small factures in an underground rock formation to stimulate additional production from new and existing oil wells. Typically, as much as 99.5 percent of the fluid used is water and/or sand.

A significant portion of the oil and natural gas produced in the U.S. comes from wells that were hydraulically fractured. According to the Energy Information Administration (EIA), in 2015 over two thirds of U.S. natural gas production and over half of our crude oil production came from hydraulically fractured wells. These numbers have increased significantly over the last 15 years.

EIA characterized how the technique has influenced natural gas production:

“For decades, hydraulic fracturing had been referred to as an unconventional completion technique, but over the past ten years it has become the technique by which most of the natural gas is produced in the United States.” 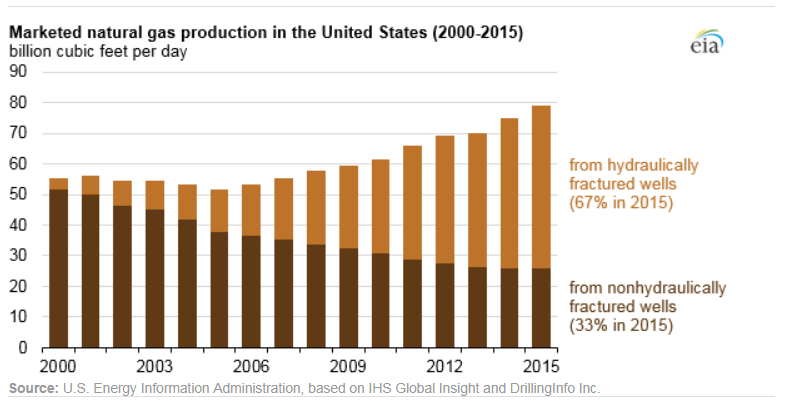 EIA also described the significant impact that hydraulic fracturing had on oil production:

“This technique, often used in combination with horizontal drilling, has allowed the United States to increase its oil production faster than any time in its history.”

Due to the increase in the use of hydraulic fracturing in the U.S., it is important to understand the steps that operators are taking to protect groundwater and minimize environmental impacts.

Key studies from the Environmental Protection Agency and the United States Geological Survey  (USGS) have shown that hydraulic fracturing poses no significant risk to drinking water. USGS summed up its findings in an article titled: “Unconventional Oil and Gas Production Not Currently Affecting Drinking Water Quality.”

The oil and natural gas industry is constantly testing and applying innovative techniques to the fracking process in attempt to minimize environmental impacts as much as possible. In recent years, producers have focused on finding new ways to frack with less water and have been using more recycled water to extract resources. These innovative techniques also often lead to cost-savings that consumers benefit from at the gas pump. When speaking about how efficient U.S. producers have become at hydraulic fracturing, one Forbes column proclaimed:

“The benefits of low cost natural gas are invaluable because cheap energy gives us a competitive advantage against global competitors while also giving American families more disposable income to spend money and bolster a U.S. economy”