Banning or Restricting Crude Exports Means Higher Prices at the Pump
Recent news reports have suggested the White House, in response to rising gasoline prices, may be reconsidering a potential ban on US crude oil exports. This is the wrong approach, as restrictions on exports could actually raise gasoline prices across the country, which recently hit a record high of $4.60 per gallon.

Our gasoline prices are linked to the global crude oil price benchmark (Brent) and limiting US crude exports reduces the amount of oil in the global market, which puts upward pressure on prices – meaning the prices will only increase. This is why anytime that we see a disruption in oil production in other major producing nations (i.e. Middle East or Venezuela), US gasoline prices tend to rise.  Preventing crude oil from the United States – the world’s largest producer – from reaching the global market would also disrupt the amount of oil in the global market and increase prices.

A spokesperson for AAA said late last year that halting US crude oil exports “could end up having the opposite effect [of lowering prices] when it comes to the price of crude oil.” He added that “since oil is a global commodity, if the US were to stop sharing, and other countries or OPEC did not pump more to fill in the gap, then the price of crude would rise. And since the cost of crude accounts for 50-60 percent of the pump price, we’d simply be raising the cost for US consumers.”

Experts at the Federal Reserve Bank of Dallas, in a research note entitled “A Ban on US Crude Oil Exports Would Not Lower Gasoline Prices at the Pump,” also recently concluded:

“Because a cessation of US crude oil exports would lower the supply of oil in global markets and raise its price, one would expect global fuel prices, if anything, to increase as a result. In other words, the prices of gasoline and diesel fuel in the US would not be expected to decline and might actually increase.” (emphasis added)

US Crude Oil Exports Can Reduce Gasoline Prices
The reverse of this is also true. When there is more supply in the global market, it puts downward pressure on energy prices here at home. When American crude oil is exported, it increases the availability of crude in the global market and, in turn, puts downward pressure on prices at the pump for Americans. 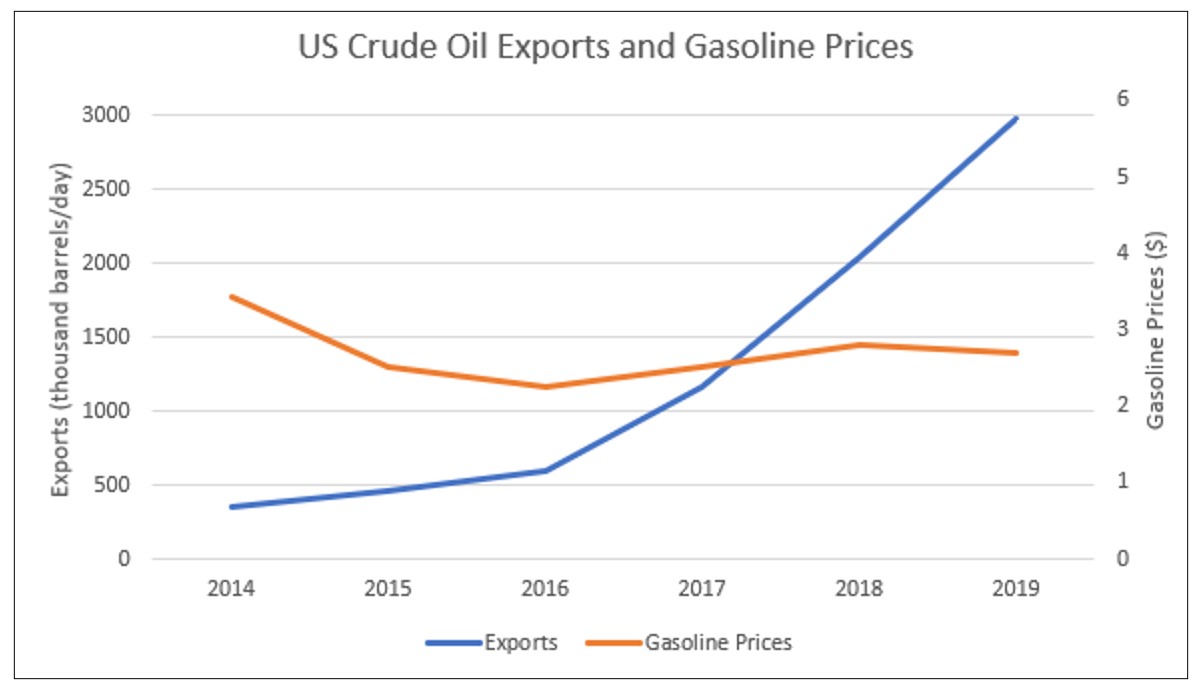 More US Oil Production = Lower Prices at the Pump
It is also worth noting that increasing American oil production has been proven to reduce gasoline prices.  Over the past decade, experts have repeatedly linked rising domestic production – as a result of the American Shale Revolution – with lower prices at the pump. AAA once credited the shale revolution with saving American motorists as much as 40 cents per gallon.