As a result of the innovation of the US oil and natural gas industry, the US became the world’s largest exporter of liquefied natural gas (LNG) in the first half of 2022, solidifying an energy superpower status that helps keep energy prices affordable for American families and businesses, benefits the US economy, reduces global greenhouse gas emissions, and strengthens our national security.

Despite these clear economic and environmental advantages, critics contend that LNG exports raise domestic prices by depleting domestic supplies, while only benefiting energy companies. The facts tell another story. The US has some of the lowest natural gas prices in the world. At the same, our allies abroad can count on US LNG exports as a reliable source of energy that is helping to reduce emissions.

A 2016 IHS analysis on the US ‘manufacturing renaissance’ identified clear competitive advantages that emerged for manufacturing in America because of the increased supply of competitively priced natural gas. For energy-intensive industries such as chemicals, metals, food, and refining, production costs have been reduced because of the increase in natural gas supply.

While US natural gas prices have increased recently due to a variety of factors, including record inflation and soaring demand, domestic prices remain considerably lower and more stable than in Europe and Asia, where prices are 4-9 times what they are in the US, which has held true even as LNG exports have risen.

This has actually prompted a shift of industrial manufacturing from Europe to the US, giving the American economy a competitive advantage. 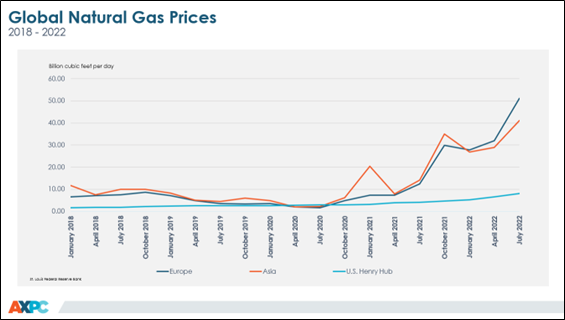 The US actually produces more natural gas than it consumes, allowing the surplus supply to be exported to our global allies. 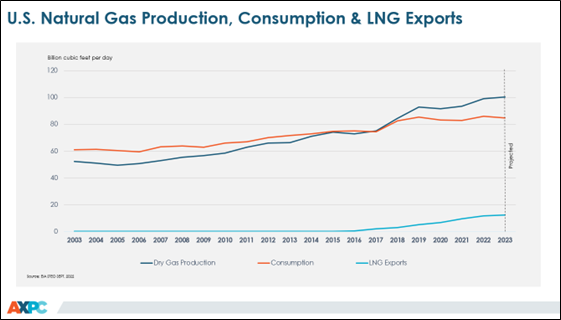 The Potential Gas Committee, a group of energy industry experts, concluded that the US has 3,330 trillion cubic feet of recoverable natural gas – more than 100 years’ worth of supply at current consumption rates. This means that prices have remained stable, even while US LNG exports have ramped up sharply over the past decade. 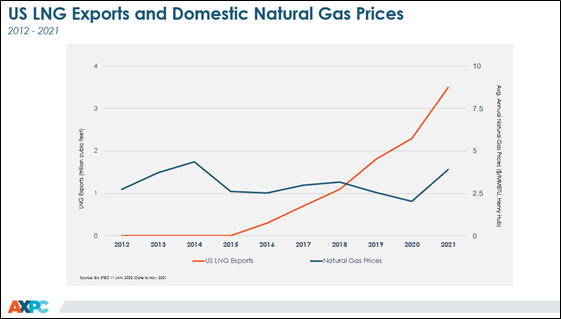 This trend is projected to continue through 2023, and it is estimated that US natural gas exports will increase 23 percent while the price of natural gas is forecasted to drop 32 percent. 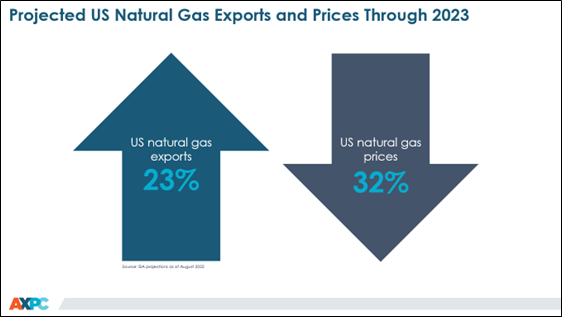 The growth of LNG exports is spurring billions of dollars in investments in liquefication facilities and shipping terminals, promoting job growth in engineering, construction, transportation, and other sectors in communities across America. LNG exports help countries around the world reduce their carbon intensities and provide a stable alternative to Russian energy, particularly in Europe.

As the world’s largest natural gas producer, the US has proven it can be a major LNG exporter while maintaining some of the most stable and affordable natural gas prices in the world.